Birth of the Bra 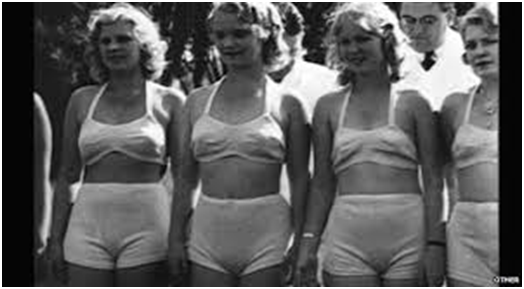 Before women started wearing bras, the history of undergarments was dominated by the corset. From the 14th century onwards, the corset became the tortuous item that wealthy women used to cover and modify their shape. Corsets worked a bit like a push up bra for the breasts, however, from the 19th century onwards corsets were often split into a girdle-like device for the torso and taking care of the breasts by devices suspended from the shoulder. Thank goodness for being a woman born in the 20th century as all those sound extremely uncomfortable!

Towards the late 19th century, things began to improve for the comfort of ladies as bras began to replace the corset. By the time of World War I, garments resembling the bras we know today had begun to emerge but they still didn’t go into commercial production until the 1930’s. These days, bra manufacture is a multibillion pound industry and now the comfort aspect is sorted, bras have become a lot more focused on fashion.

The first modern style bra was patented in 1889 by a German woman called Christine Hardt. A German company began mass producing a bra in 1912. World War I led to metal shortages, which probably did women a favour, in that corsets were discouraged due to the amount of metal they used. When, in 1917, the U.S War Industries Board asked women to stop buying them, it was said that 28,000 tons of metal was saved which was enough to build two battleships! From then on, most fashion conscious women of Europe and North America began to adopt the bra. For the Prima Donna Deauville White Bra, visit http://www.orchidlingerie.co.uk/white-prima-donna-deauville-full-cup-bra.

The boyish looks of the 1920’s encouraged a bandeau style bra which flattened the breasts. While this was easy for small breasted women, it made life difficult for women with larger breasts. In 1922, a seamstress in New York was to turn the tide for bra fashion. Ida Rosenthal, along with her husband and the shop owner where she worked, noticed that a bra that fit one women would not fit another, with the same size. They began to develop bras for all sizes and ages, designed to improve the look of clothing on the wearer and put the emphasis back on shaping and support. Their bras were about accenting and lifting rather than flattening, which had begun to be criticised by health professionals anyway. In 1927, William Rosenthal filed patents for full-figured, nursing and the first seamed uplift bra. An industry was born.

Ever wondered where the link between cup size and letters originated from? In 1932, the S.H. Camp and Company decided to look at the size of a woman’s breast and correlate that to a letter of the alphabet. They advertised a diagram with labeled profiles of breasts in the 1933 issue of Corset and Underwear Review. These cup sizes began to be introduced throughout the later part of the 1930’s, however, many catalogues still went by small, medium and large until well into the 1940’s.