The Life of Murray Walker 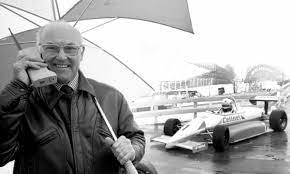 The recent loss to the world of commenting and Formula one in general has been keenly felt with the sad passing of BBC and Itv commentator Murray Walker. One of the most recognised and beloved voices on television the man’s knowledge and ability to get things amusingly wrong has long entertained generations of Formula one fans. The man’s exuberance and enthusiasm more than making up for his odd, but highly entertaining gaffes. 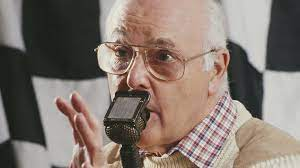 Murray was not a natural commentator, in fact he came to it quite late in life. His Father was a keen motorbike racer and the young Murray played his active part. However he took on role in advertising first and had a successful career, He was responsible for the immortal “Opal Fruits, made to make you mouth water”.

In the early seventies, Murray accepted a role as the BBC’s motorsport commentator on Formula one, bikes and Rally cross. He was paired up with James Hunt after his retirement and despite finding Hunt difficult and wayward he soon formed a close bond and working relationship. He had high times seeing his friend Nigel Mansell win the title and to his great joy Damon Hill, the son of Graham. There was also sadness, he pitched the coverage of Aryton Senna’s passing perfectly.

He remained with the BBC but was persuaded to join ITV when they took over the coverage, He then had adverts to deal with (and probably appreciated the breaks). He remained a fixture of respect even after his own retirement. He will be greatly missed by the Formula one fraternity and the British public in general. Only a perfect job by TV Aerials Cheltenham experts Steve Unett Aerials could bring it to life.