Welded Steel Bear to be Displayed Near Dunbar 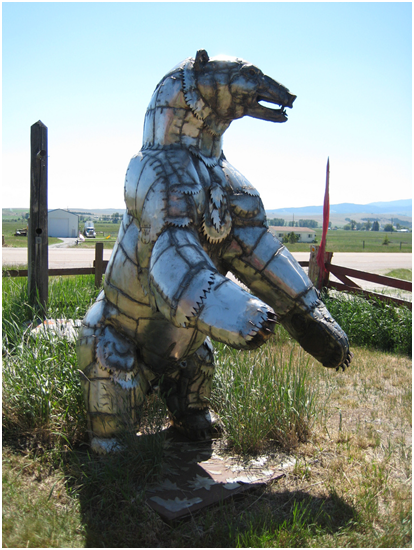 Scotland looks set to get a giant steel bear sculpture by the same artist who created the well-loved Kelpies horses’ heads. An application has been submitted in East Lothian to erect the five metre-high statue close to the A1 road near Dunbar.

The sculpture is being planned and instigated by Andy Scott, who created the Kelpies in Falkirk in 2013. It will be paid for by the sculptor with help from sponsorship, and not through the public purse.

The plans indicate that the giant bear is to be made of welded steel – similar to the materials used in the popular Kelpies, which have recently been voted ‘national treasures.’

The steel will be galvanised so it is protected against the rain and wind, and will be secured via welding to a steel base, bolted onto a concrete slab which is fixed to the ground through the use of anchors.

Steel is a flexible and hardwearing metal which is often used to create sculptures and ornaments for both public spaces and private gardens.

Corten metal garden sculptures, such as those available at http://www.afsculpture.uk/scuplture-portfolio/corten-metal-sculptures, are designed to rust consistently to give a beautiful finish.

The bear sculpture will be erected to commemorate the life and times of John Muir, one of Dunbar’s most famous sons. Born in 1838, Muir emigrated with his family to America in 1849 at the age of 10, and is most famous for founding the country’s national parks.

According to the John Muir Trust, Muir had a passion for wild places which led to a life-long quest to protect them.

Called John of the Mountains in later life, Muir was responsible for petitioning the American Congress to pass the National Park bill, which helped pave the way for the national park system. He also helped establish the world famous and extensive Yosemite National Park.

The bear is symbolic of both his interest in wildlife and his travels in the wildernesses of Alaska and America’s west.

The new sculpture will be visible from the A1 as well as from the railway system entering Dunbar. It is hoped it will become as big a draw to tourism as the Kelpies have undoubtedly become in Falkirk, where thousands of visitors travel to see them every year.