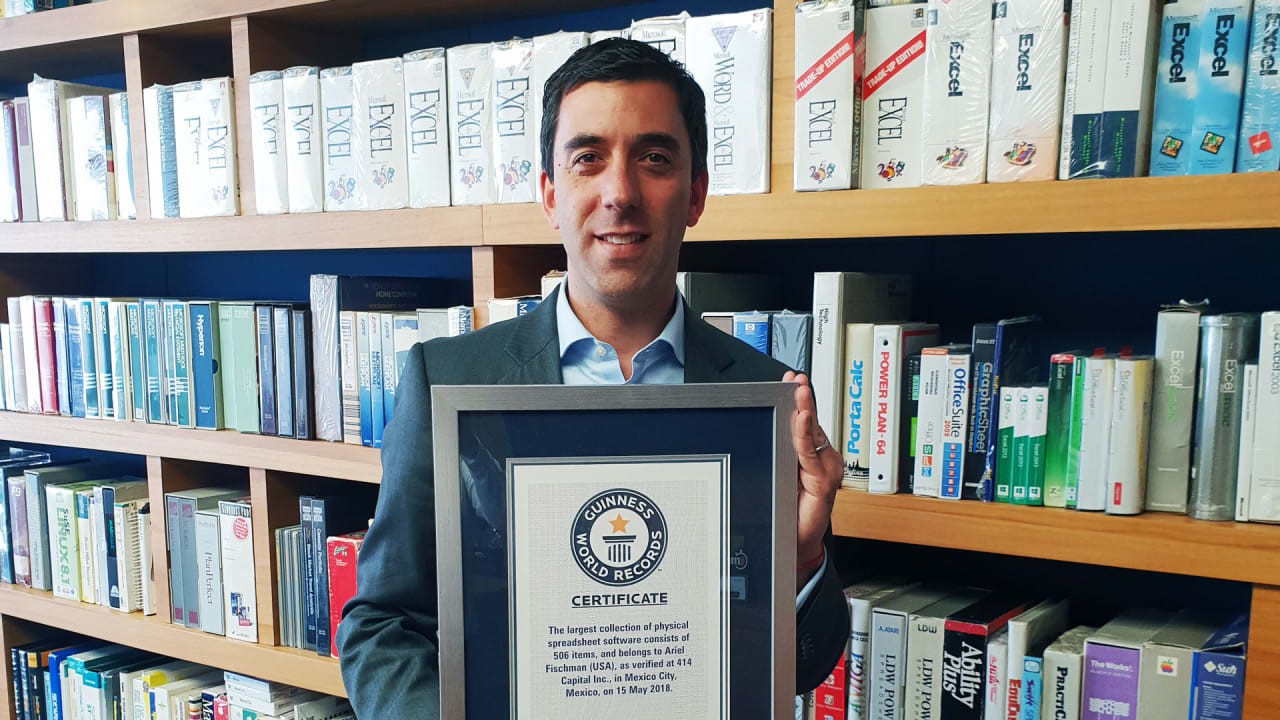 You’ve heard of collectors for everything from stamps to retro gaming systems, but have you ever heard of a spreadsheet software collector? One man has achieved a Guinness World record for just that.

Ariel Fischman’s love of spreadsheets has seen him accrue around 800 units of software, leading the Guinness World Record title for the Largest Collection of Physical Spreadsheet Software to be bestowed upon him in May 2018.

Fischman, a financial advisor hailing from Mexico City, says he enjoys the power of spreadsheets for converting an array of concepts into formula and the challenge that comes with building the analysis.

Analysis of the collection

Fischman’s collection spans the decades, and the software comes in all shapes and sizes. Magnetic tapes, ROMs, solid state cartridges, CDs, DVDs, and cassette tapes all fill his office. The software comes from different producers, including Microsoft and the Microsoft Multiplan, the predecessor of Excel. IBM, Apple, and even the likes of BBC and Boeing can all be found in Fischman’s collection.

Fischman’s documentation of the history of spreadsheets is testament to his perseverance, scouring different sources for software and its documentation. The most challenging piece to add to his collection were the series of beta mid-1985 versions of Excel. It’s been an expensive hobby, with Fischman claiming he’s paid almost four figures for some units.

The history of spreadsheeting

Software has come a long way since the early days of manual input with a limited set of input sources and analysis instructions. The ways to input data, like PDF to Excel conversion, as well as the plethora of uses and analysis tools, make Excel incredibly powerful and versatile. The collaboration between software has also advanced with a PDF reader allowing for PDF to Excel conversion such as PDF to Excel, whereby the reader will automatically employ text recognition for any scanned text.

Fischman believes there is significant value in appreciating how today’s software stemmed from earlier versions, where changes can be traced back through time to when the entire Beta process was done by mail. It was the latter part of the ’80s that saw increased competition to see who would come out on top as the leading software provider, with Excel being the brand still synonymous with spreadsheeting today.