The jumper for all seasons 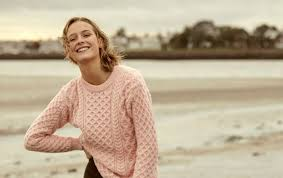 Aran Sweaters are named after the Aran Islands off of the western coast of Ireland, where it is thought they were first designed. They are typically knitted and made from 100% wool, although they are available in other materials such as cashmere and fleece. You can find them in a number of different colours, with navy and cream being the most traditional.

Womens Aran Sweaters, like the ones from Shamrock Gift consist of honeycomb stitches that form the body of the sweater. They are named after a range of islands off the west coast of Ireland where local wives and mothers created the sweaters out of the local sheep’s water resistant wool. They were then given to the farmers and fishermen who were so important to the provision of food on the island. These sweaters kept them warm and dry out in the fields or the boats. It wasn’t long before they started to become popular with mainstream society and then a staple in the world of fashion.

There are several styles of Aran sweaters to choose from. They come in a variety of colours such as the traditional jigsaw pattern, but there are some more modern stylings that have been created in recent years. They are even becoming popular with celebrities such as Taylor Swift and Chris Evans.