The best ZX Spectrum Game ever. 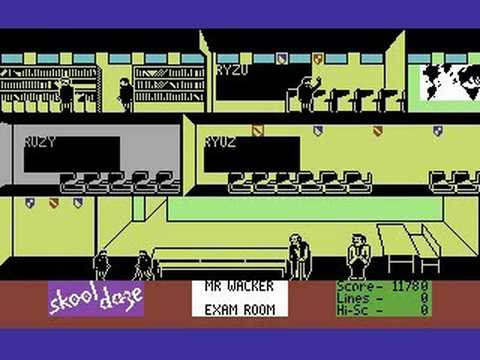 It’s easy to get a bit snippy about early eighties computer games, especially as we now live in a world of virtual reality, polygon framed, rotoscoped, multiplayer  games where it feels more like we are in a film. This is very true when we think of Halo, Assassin’s Creed and the Last of Us for example. However, lets not forget that the programmers back then were usually working in a basement/bedroom on a computer that for the most part had little more RAM and operating machine code than a pocket calculator. Amongst the sea of countless Space Invaders versions were a few gems that set them aside from others. These games pushed the envelope of what small machines like the Spectrum could do and one of those was Skool Daze.

As the name suggests the people who came up with it could well do with a bit of extra education themselves which is strange as one of the co-creators was a teacher. They might like to consider the help of a Gloucester Maths Tutor for example. The basic premise was simple enough. You are Eric a young ne’er do well who needs to intercept his report card before it falls into the overly critical hands of his parents. There are too many occurrences of the letter F on the card and Eric needs to get it so he can change them to B’s. Unfortunately the card is locked in the staffroom and the only way that Eric can get it is to extract the safe code from the teachers. He has to do this by lighting up all the school badges by either hitting them with catapult stones, bouncing them off teachers heads or reaching up and tagging them. Once he does this if he hits the teacher they will blurt out a part of the code in their dazed state.

Seems easy enough but in your way is the School Swot, Bully and Boy Wander the cool kid. You also need to avoid lines from the teachers or you will get expelled. The crimes included sitting down in class, punching other kids, which you have to do to reach some of the badge,. Being late and firing the catapult.

The real problem is the ancient history teacher. He can only remember his date of birth if he sees it written on a blackboard. It is a randomly chosen famous battle and without the internet to check up with you had to use a handy encyclopedia.