What you need to know about geodesic domes

A piece of history

Modern tensile structures, like the Millennium Dome and the Eden Project in Cornwall, have their roots firmly in the past. These tensile fabric structures started life thousands of years ago as tents and shelters. This most simple of structures, a fabric stretched over a frame, has evolved over the years into these huge and famous examples. Other forms of tensile structures like the geodesic dome have also evolved, from yurts in Central Asia, to the Spaceship Earth at the EPCOT Center in Florida, and the Eden Project. 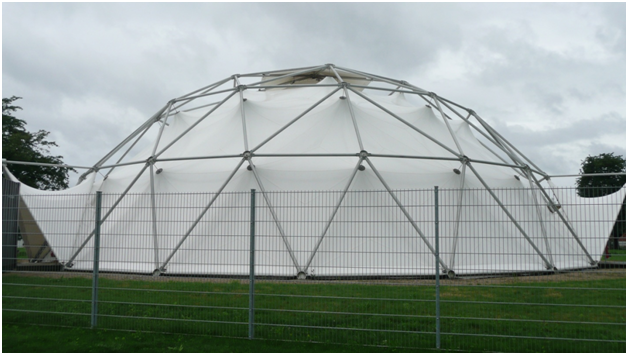 It’s thanks to their simplicity and effectiveness that tensile structures are so widely used today. Whether a geodesic dome or a more simple umbrella shelter, the principles of construction haven’t changed in thousands of years.

The beauty of structures like the dome is their strength. The frame, which is made up of triangular sections, is very light and very strong. Today, this simplest of shelters is still being used all around the world, in yurts on the Steppes of Asia, campsites all over the world, and in much bigger and grander structures, thanks in part to pioneering American architect Buckminster Fuller.

Fuller first demonstrated his dome at the Milan Triennale in 1954, although the first high-profile use of the dome was at the 1964 World’s Fair, in New York. Designed by US based Synergetics, the dome is still in use in NYC at Queens Zoo, in Flushing Meadows. Fuller himself created the large geodesic dome for the US Pavilion at Expo 67 in Montreal, with fellow architect Shoji Sadao. In 1982, the enormous geodesic dome of Spaceship Earth at EPCOT was installed, and in 2000, the world’s first geodesic dome hotel was built in Chile.

Of course, tensile structures, whether domes or shelters, don’t have to be enormous, and tensiles are seen everywhere from school canopies providing shelter and shade in playgrounds, to walkways and shelters in town centres, race tracks and transport hubs. Their flexibility and simplicity is why companies like http://signaturestructures.com/school-canopies/ continue to design and build them for projects large and small.

Advances in technology have meant that stronger and lighter fabrics and materials are now available, allowing the basic tent or yurt to evolve into the amazing modern structures we can see today.