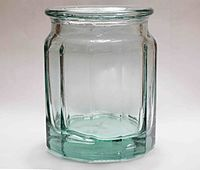 Everyday we are surrounded by glass, we see it everywhere and don’t normally give it a second thought but where would the modern world be without glass? From our home windows to food jars and from windscreens to mirrors, it really is everywhere.  When we are sat at work we are literally surrounded by windows of glass. You wouldn’t need to worry about how clean they are, the quality of the installment or who looks after them if you were in an Office Space Bracknell location found at links like http://officespacebracknell.co.uk  So what is it, how is it made and why do we use it so much?

Glass is made from sand and minerals melted together at extremely high temperatures. Glass occurs naturally in the mouth of a volcano when the heat of an eruption melts the sand and leaves behind Obsidian, a hard black glassy stone. These were used as tips for spears by early man. When glass is being made, when the temperature reaches 1700 degrees, other materials can be added to create different coloured glass. While still in it’s molten form, glass can be moulded into different forms, for example, for windows, car windscreens or even ornaments.

The other really great thing about glass is that it’s also very eco-friendly as it is completely recyclable and can be used an infinite number of times without suffering any loss of quality. In fact, man made glass has been discovered by archaeologists dating back to 4000 BC. From the 1st century BC, glass blowing was the most common way to make glass containers and people in Britain learned the elements of glass making after the Romans arrived.

A significant milestone in the process of glass making was made by a man called George Ravenscroft who introduced the use of lead. Wanting to undo the effect of clouding that often occurred in brown glass, he introduced lead to the raw materials used in the making progress. The result was that the glass was softer and more refractive which made it bright and beautiful. As a direct result of his actions, important advances could be developed in optical lenses, microscopes and telescopes.

Glass making in the current era is a truly modern industry where quality and design are crucial to remain competitive. Glass plants are capable of producing millions of glass containers a day. Glass containers are incredibly tough as they are impermeable, air-tight and transparent. This protects the contents from oxygen, moisture, spoilage and bacteria. We cannot imagine a life without glass as it really is everywhere. When we eat and drink, turn on light bulbs, use our mobile phones and get in the car. Due to it’s fantastic recyclability, it is doubtful we will ever see a decline in the use of this versatile material.

Glass is definitely a bit of a conundrum. Hard enough to protect us but fragile enough to shatter easily, opaque as sand but completely transparent – glass is a bit of an enigma. Glass is also both a solid and a liquid and neither at the same time!